If obliviousness were a respected skill, by now someone would have awarded me an honorary doctorate in it.

Walking along the hallway of the home where I’ve lived for a decade. Stop in surprise. “Hey, how long has that wall sconce been there?”

I’ve spent most of my life living almost exclusively inside my head, so I am proud of my recent accomplishments. Nowadays, each day I experience the outside world, for many minutes at a time. (The minutes are not consecutive. But still.)

Several decades ago, a friend gave me a mug for Christmas. It was covered in cat drawings. (Drawings of cats, not by cats.) I was surprised, because that friend was not known for kitschy or cutesy. I glanced at one frolicking cat on the mug, forced a smile, thanked my friend, set it aside.

The mug sat in a cupboard for ages, until I came to appreciate the camp value of having a cat mug. I began to drink my public coffee in that mug. I carried the mug with me around offices, into meetings, probably even as a volunteer in my kids’ classrooms. It turned out to be a hell of a sturdy mug. All those years, all those trips out in the world, hardly a chip to be seen.

Only very recently, washing the mug, I realized.

I can’t tell you how many people noticed. My obliviousness extended to other people’s reactions to my dirty cat mug. 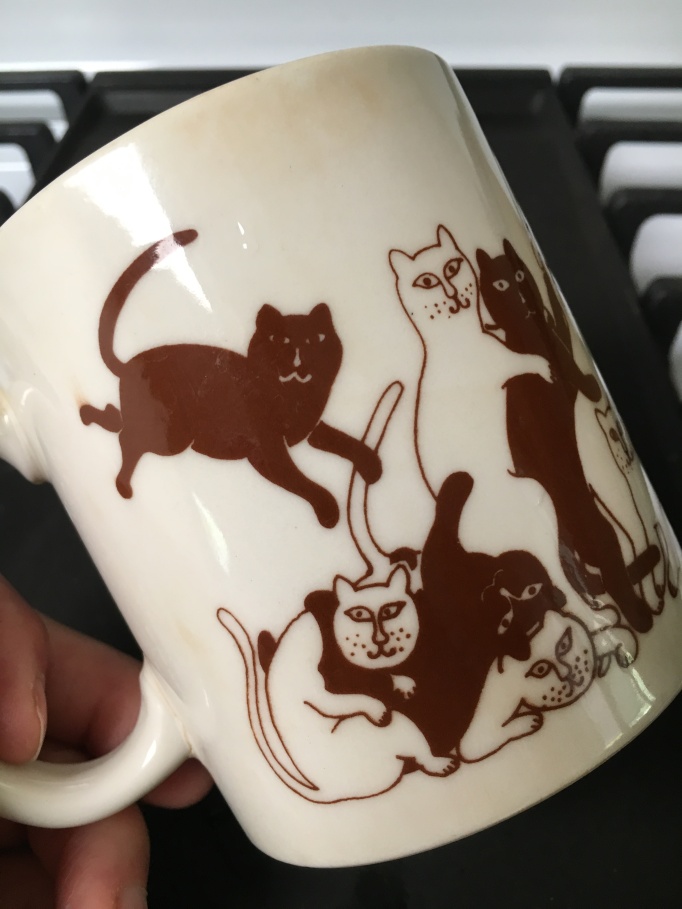 I collect evocative signs. Here are some of my recent favorites.

Hoping they mean of and to:

And now Big D-O’s is out of business. Standards too high, perhaps?

Fortunately, this was not my experience:

Our new kittens, between mayhem sessions. For greatest realism, view these photos in a loop. The “active” phase is missing because all those photos are blurry.

P.S. No I cannot explain why we thought it was a good idea to get three kittens.

Resting up for the next round of destruction and adventure.

On one level, I hate routine. I’ve made important life decisions based on a futile attempt to avoid repetition. Changes of jobs, homes, cities – and probably relationships. I have to fight feeling trapped once I exhaust the options for fresh experience. But that time will always come. There are only so many ways you can drive to the store, if you are going to the same damn store from the same damn house.

Yet, concurrently, repetition and routine provide essential foundations to so much that matters to me. While it is always great to share a new experience with my kids, the comforting patterns of family life are constructed of routine. There is no question that I plan most of my writing during mundane tasks like toothbrushing or weeding. And one of the richest benefits of travel is how much I appreciate home when I return.

I have a friend who talks about Buddhist intent to stay fully present in each moment – aware of the give of the keyboard as I type, conscious of the flow of water and the scratch of the scrubpad as I wash a plate. She strives for this awareness to feel grounded and calm. I try it and discover subtle variations that make each repetition unique. Doing this seems to be as close as I can get to meditation -with all my Western impatience and resistance to organized faith.

Although debate with the universe is not recommended…

Damn, just when I was getting the hang of it.

She wondered about genetic drift.

Or maybe the reverse is more meaningful.

He never wondered about genetic drift.

No more fooling around.

Next time I come back as a cat.

Death comes to all of us and yet.

They told me to expect the unexpected but here I am.