Because we must be insane, we have 5 cats. Two grown cats, Bop and Luna, age 10; and three teen cats age 8 months.  The youngsters immediately displayed distinct personalities but are all as friendly and as loving as can be. 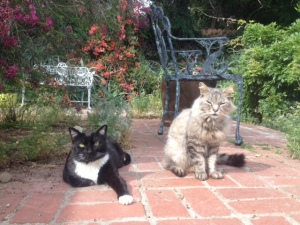 Bop (left) and Luna. Bop needs an attitude adjustment. Luna is an object of worship. In ten years together this is the only time they have ever hung out together!

One of the grown cats, Luna, tolerates the youngsters but avoids them because whenever they spot him, all three converge to incessantly sniff him and follow him and try to get him to touch noses with them.

Grown cat Bop wants to be the only critter and she never will be, which has made her bitter. She is sweet to humans but chases the 45 pound dog; she is prone to unpredictable attacks on Luna (until Luna whaps her one); and she wants to kill the youngsters. Whenever she gets the chance she attacks youngsters Arrow and Bo. 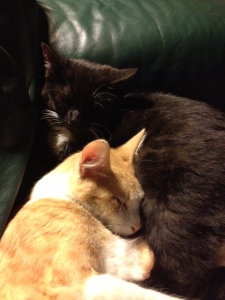 Arrow and Bo, the most frequent victims.

Mostly we have kept her separate from the youngsters, which is even more of a pain than it sounds. Every so often we let them mingle, in hopes the youngsters will realize that they are now larger than Bop, and that if they stand up to her she will leave them alone. Bop is a classic bully. But so far the youngsters still run.

Recently, for the first time, Bop attacked the youngest cat, Leo, who started as a runt and doesn’t understand that he is now enormous. Leo’s is a goofy and gentle soul. He purrs when he eats. He plays with the dog’s tail. 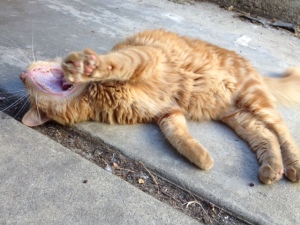 When Bop chased him, Leo got so scared he wet himself.

Now this is where the story gets good. After I sprayed Bop with water and locked her away, the other 10-year-old, Luna – the worshipped one – demanded to come inside.

He went over to Leo and touched noses with him several times, apparently in solidarity. Then he went back outside.

Leo pulled himself together a little and soon the other youngsters showed up to help Leo with his grooming. Within the hour he was back to his goofball ways.

P.S. Although this post makes light of it, I’d appreciate any advice about how and whether the youngsters can be put together with Bop. My son wants to get rid of Bop, but I can’t do that. She may be a mean asshole but she is part of the family. 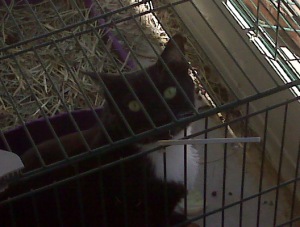 Bop the villain, back when we had a rabbit. Bop loved to go in the rabbit’s cage, probably for the adrenaline rush. The rabbit attacked anyone who went near that cage. Bop and the rabbit were kindred spirits.