Until a couple weeks ago, I had never been to Hawaii, which has always seemed terribly wrong, given that volcanoes and oceans are two of my favorite things. Also, I love that Hawaiian slack key guitar sound. So I was thrilled to get a chance to go to a conference in Honolulu, on Oahu, even though I knew that these were the Hawaiian island and area least likely to interest me.

I am a churlish tourist who hates being with her own kind. For me, the best way to travel is to plant myself somewhere for a stretch of time and get a sense of what it would be like to live there. During this one week trip I did get a couple chances to escape the tourist centers where my hotel and meetings were sited, and venture into areas where people actually live. 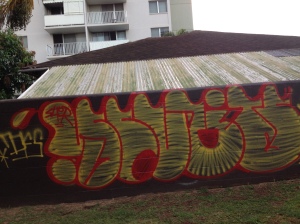 One dawn I walked east, away from the beach into a neighborhood of boxy tired apartment complexes. At 7 am everything was dark and closed except for the bus stops with folks headed away to work. I happened by a park with some amazing graffiti. Note that the white form is some kind of creature with a tail.

I’d  heard about the fragrance of plumeria in Hawaii, and I adore the scent of the small, captive plant a friend somehow keeps alive in a container in his non-tropical garden. I was disappointed to discover that on Oahu, the plumeria are trees with blooms  too high to smell! (Turns out I should have bought a plumeria lei, to envelop myself with the scent as I went through my day.)

My last afternoon on Oahu, a Hawaiian coworker drove me around the eastern corner of the island. We stopped at a viewpoint with trails that could have taken us even higher up the mountain.

A hang-glider happened by.

From the viewpoint, I caught my first look at the north side of the island. After ogling the view, we headed down the hill, west and north, to lunch in a working class community nestled behind that beach. 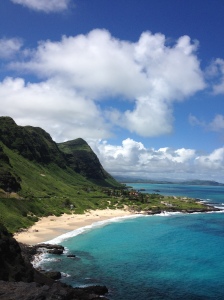 We stopped at a local hangout of a takeout restaurant.

After ordering the barbeque chicken platter, we had lunch in the adjoining, semi-open-air dining room. There, between the walls and ceiling, dwell scruffy and bold pigeons who come out to forage for scraps. According to my local pal, pigeons are a new addition to the island, and they are quickly becoming a nuisance. (No. Really?) Over the last few years, the finches have disappeared from his bird feeders, crowded out by the pigeons. Turns out finches are plentiful in Hawaii. People trap the finches and sell them to pet stores. There is no market for pigeons.

The dining area walls are painted with scriptures and lightning bolts. 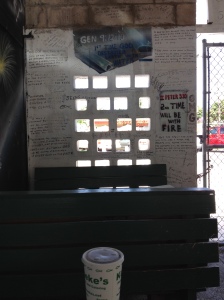 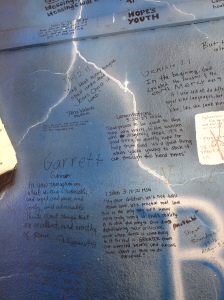 And the walls are covered with scriptural graffiti – Bible quotes in the handwriting of countless patrons. 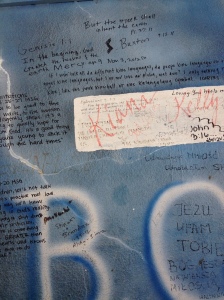 After lunch, we took the highway back to Honolulu. The mountains are actually the back rim of an ancient volcanic crater. The rest of the crater rim collapsed into the ocean, many thousands of years ago, in a massive landslide that created an enormous tsunami. 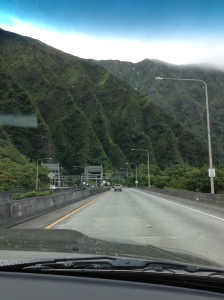 The highway cuts through the mountains in a looooong tunnel. Here is the tunnel entrance 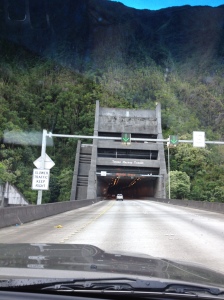 and this is the view upon exit.

The area looks remote but is scant few miles and minutes from Honolulu’s congestion.

These glimpses of Oahu away from Waikiki Beach gave me a better understanding of why people so love these islands.

See? Churlish. I told you.

This is the third of three posts about my trip to Hawaii. I also blogged about the sights near Waikiki and a walk from Waikiki to Diamond Head.

There are a lot of great scenes waiting for cameras in Hawaii as I learned when I visited the Hawaiian island of Oahu for the first time.  I made the trip for work, so I spent most of my time at the convention center, or near my hotel on Waikiki Beach. My last day there, I walked a few miles from my hotel to another set of meetings near Diamond Head, and took lots of photos.

That distant hill and point is Diamond Head. I took this photo from the harbor near my hotel on the afternoon of my arrival. I didn’t see any bugs in Hawaii but saw much evidence of their existence, such as in the trunk of this tree. 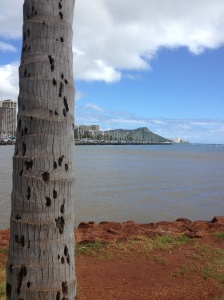 The walk to Diamond Head was the most ambitious excursion of my trip and most of it took me through spectacular scenery. in the distance is my goal, lit by dawn sunlight.

The banyan tree is a common sight on Oahu. Older trees have roots that grow up and add themselves to the trunk, creating a broad, ropey base, like this tree en route to Diamond Head.

Whatever you do, don’t feed those …. um …. those…. Altered signs seem to be a trend here.

And then there are signs that promise other alterations. Why wait until dinner? I call this one cutting to the chase.

I loved the rough surface of this jetty, which exists to protect tourists from slipping into the sea. It may be too close to the lunchtime happy hour  to succeed at all times, however.

Now I’m on the Diamond Head side of my earlier photos, looking west and back toward the Waikiki Beach hotels.

The road took me uphill through neighborhoods that reminded me of Santa Barbara, California. Only 9a but it was getting warm.

I went past cliffside parks with trails down to the ocean, some of which were not safe to hike. Or anyway I think that’s what the sign was trying to tell me.

There was an old lighthouse, now occupied by an island bigwig. 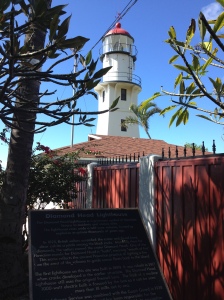 Surfers in Hawaii have so many choices of places with great waves!

During my week on Oahu, the weather fluctuated continuously although the temperature held to the high 70s, low 80s. Sunny then cloudy then drizzle then wind. Blasts of rain punctuated with balmy breeze. Humid then less humid then more humid again. Clouds from the north were always piled up against the mountains that stretch along the center of the island. I took this photo of the clouds and mountains from the glass elevator at my hotel. 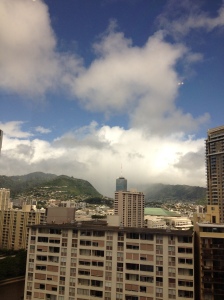 Here is a cloudy moment near Diamond Head.

It came amidst the sunny moments like this one.

This is the second of three posts about my trip to Hawaii.

I also blogged about the sights near Waikiki and glimpses of non-tourist Oahu.

Recently, I was lucky enough to visit the Hawaiian island of Oahu for the first time, and now here are some posts to share some of the experience.

Oahu is one of the smallest of the Hawaiian islands, and by far the most densely populated. I made the trip for work, so I spent most of my time indoors in meetings. Still, I managed to enjoy a week of sunrise and sunset at the beach, and although I was “stuck” in tourist-riddled Waikiki Beach – well, there are reasons that locations become popular, and here the natural beauty shines through the murk of tourism and overpopulation. Honolulu may be the least lovely spot in Hawaii, but that least surpasses many a most.

To get to Hawaii from Los Angeles I took a five hour flight over the Pacific Ocean.

Traffic sucked on the shuttle from the airport to Waikiki. Turns out traffic sucks everywhere in Honolulu. I could even see traffic snarls from my hotel room.

Fortunately my room had a big window and this was the rest of the view, at night 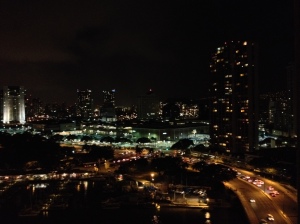 and during the day.

I was on the 17th floor and I kept the large window open all the time to luscious warm fresh air.

The harbor water is brown for at least two reasons. The rocks and dirt are all volcanic – very high in iron –  which makes standing water look rusty. 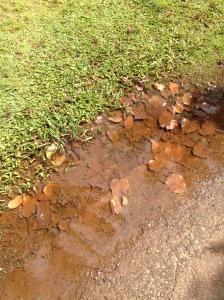 Also, the harbor water is filthy. You probably can’t see the black fish nibbling this trash from below. 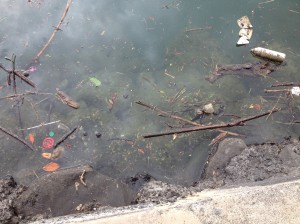 Best to view the harbor at night, especially when the neighboring hotel stages its weekly fireworks display.

One wonders whether the hotels also stage the vast number of rainbows that materialize over their roofs. Many are double rainbows. 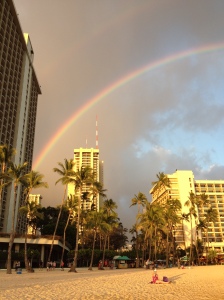 Here’s a rainbow with a nearly full moon, just prior to a golden sunset. 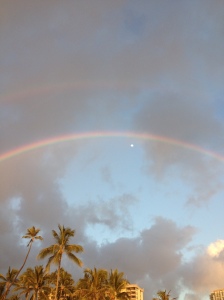 I spent my days at meetings in the convention center, where this was the view of the ocean.

But the sunsets were my own to enjoy.

And I was up to await the dawn, just like these palm trees. 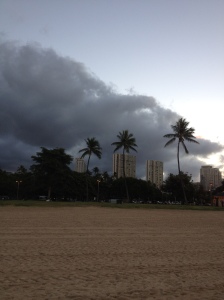 Amazing how many people were in the water at dawn!

Hawaiian beaches are gorgeous yet incomplete, as they lack pelicans. There are plenty of pigeons and seagulls. Also, this handsome bird hung out with fisherman near a bridge.

He never let me get any closer than this. Catlike, he would walk  as though indifferent to me, but aware of my every move, to maintain this distance whether I slowed down, sped up, or stopped.

I have multiple  pictures of this bird, taken on more than one day, all at this distance.

This is the first of three posts about my trip to Hawaii. I also blogged about a walk from Waikiki to Diamond Head and glimpses of non-tourist Oahu.

I love reflections, the topic of the current WP Weekly Photo Challenge. I especially love the otherworldly reflections of puddles. On the edges of a puddle I can see the reflected image continuing – into a separate world, just beyond the edge of the puddle. I should be able to take a step and enter. But I haven’t taken the right step yet – and even the dog can tell me that when you step in a puddle, what happens next is wet paws, not entry to a new dimension.

Here is a dawntime reflection of a puddle I discovered during from my recent trip to Hawaii (travelog post coming soon), which confirmed that my yearning to visit the new dimension exists regardless of how nice the current dimension is:

Here is a majestic piney mountain world reflected in a puddle:

Speaking of Hawaii, here are some other reflections I caught during my visit to Honolulu. 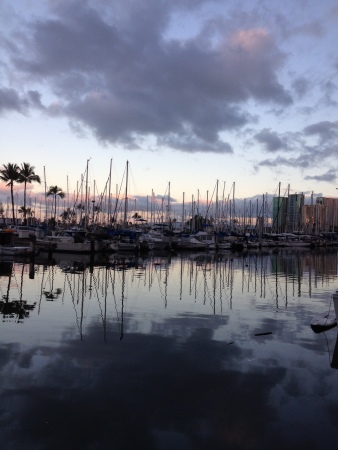 New day at the harbor, Honolulu. 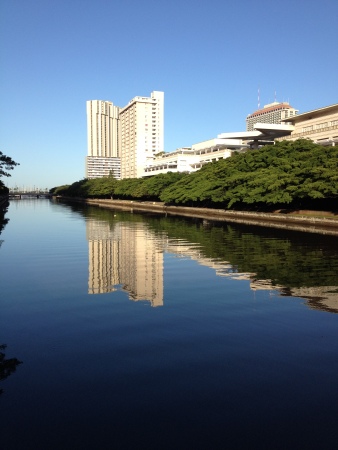 P.S. Thinking about reflected worlds was one of the inspirations for my upcoming fantasy detective series. There, the other worlds are called Frames, and I’m happy to say the first book in the FRAMES series is in final editing. Another coming soon (but not as soon as the travelog post).

P.P.S. I’ve got numerous photos of reflections in other posts. For example, in these posts about an optical illusion, a search for a deadly predator, and a spectacular view at the end of a hike. I will let you figure out which is which: here,  here, and here.