In my yard, Spring is a time of great destruction. All manner of flying insects flit by to tease the cats. The insects escape into foliage, the cats go after them. Typically, the insects escape harm but the foliage does not.

I’m saying cats but the main culprit seems to be Leo, an excessively large feline: 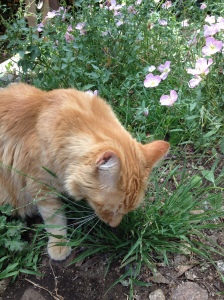 Leo’s personality spans the range between goofball and doofus. Except when an insect is nearby, he is the quintessential gentle giant:

Leo displaying his most common approach to life: jus’ chillin’. Not yet trampled poppy in foreground.

The other day I saw him body slam a sage to nab a grasshopper. The grasshopper popped away, and Leo shot through several feet of leaves in futile pursuit. He left behind a sage with snapped branches and a hole in its greenery:

Memorize the damage to this sage. You will soon be asked to tap this memory.

Hmmm, thought I, recalling the backyard wisteria. It is mostly dense lush green, now that it has finished blooming:

It is like a cave inside this thick wisteria.

However, there is one hole, with snapped limbs:

Does this remind you of any damaged plant you have recently viewed?

I had previously assumed that a bear had somehow entered my backyard and fallen into the wisteria, because several thick sturdy limbs are broken: 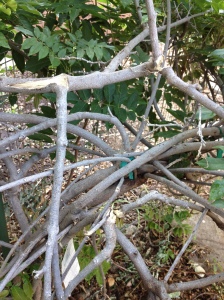 Bear(?) damage to the wisteria.

However, after the incident with the sage, Leo has become the prime suspect in the wisteria attack.

As always, even if he confesses, punishment will be out of the question. He is just too cute. Here he is cuddling with Luna:

If there exists a cuter cat picture, please comment me the link!