The Gulf Coast of Florida (and surely, many other locations) has beaches where fossil shark teeth are abundant. My young nephews collect pails full of them! (That is my idea of a fun vacation: planted at the ocean, sifting shells and sand to hunt treasures.) On a brief recent visit to a beach near Venice, Florida, I spent about an hour on one of those beaches and made some amazing finds!

There, see all those fossil teeth? 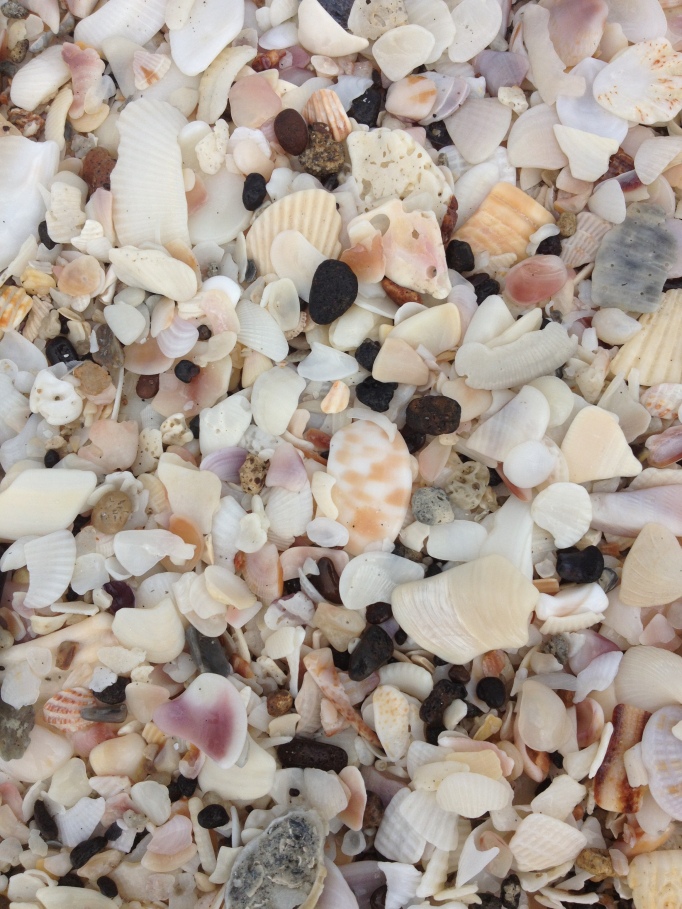 Actually, you need to look more closely. Be prepared to be distracted by all the amazing shell fragments! 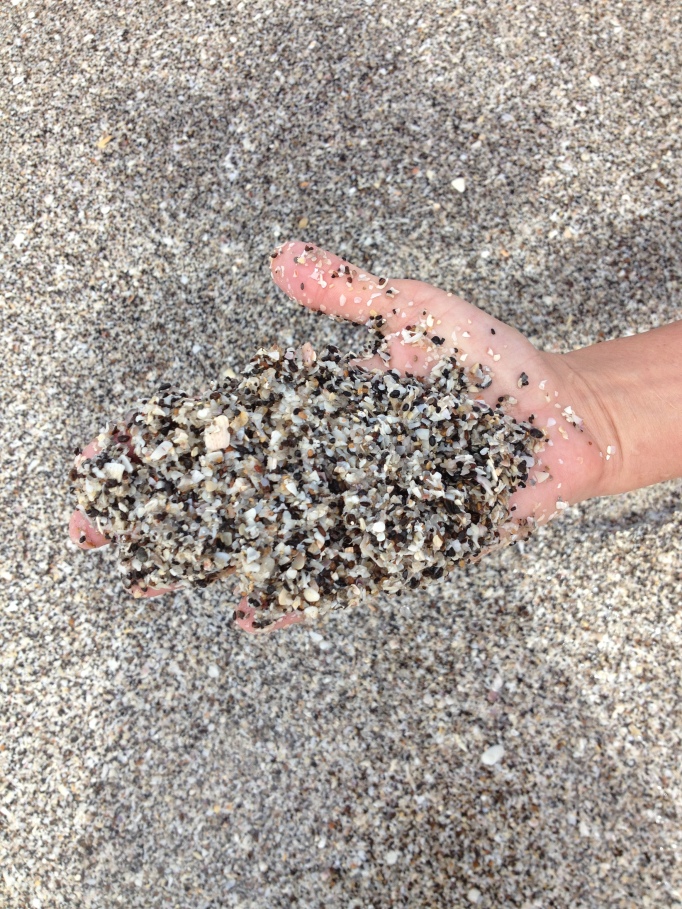 Sometimes a tooth sits on the surface in an obvious manner but usually you will need to sift the shells, a handful at a time. 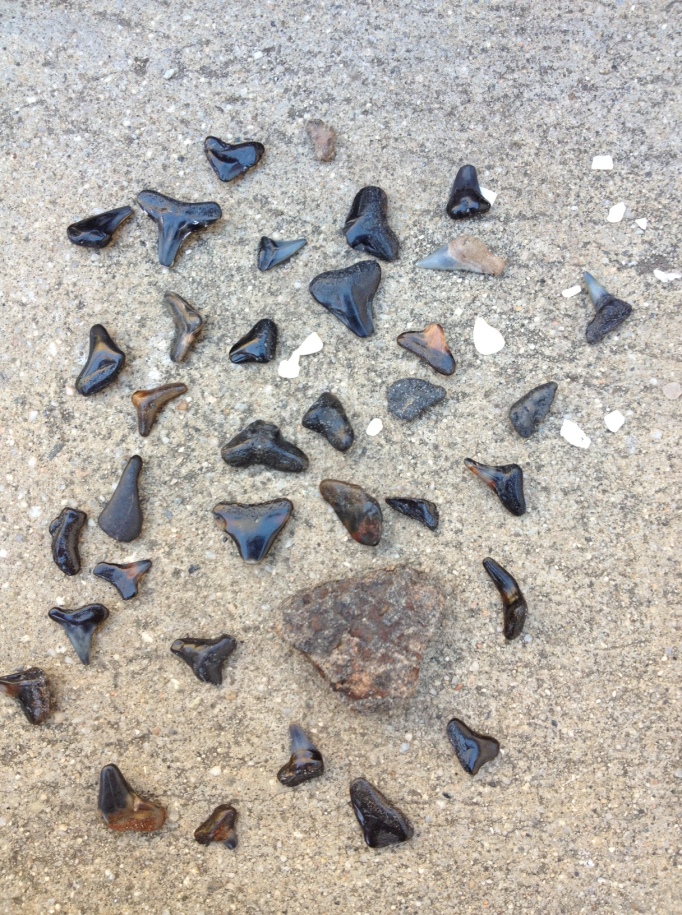 The results of my hour of searching, discovered one tooth at a time.

The WP Weekly Photo Challenge is to show “one”.

I’m a disaster junkie. Natural disasters amaze me. I hate it when people get hurt, but the forces of nature that create the disasters leave me awestruck.

A couple years ago, I learned about Lake Okeechobee, a sinkhole that is the seventh largest freshwater lake in the United States. That’s a big sinkhole!!

I also learned that tragically, in the 1920s, hurricane winds blew water over the tops of Okeechobee’s levees, which killed hundreds of people. Since that time, the levee tenders say they’ve rebuilt to withstand anything the Earth can send their way. (Hmm. Where have I heard that before?) There is apparently some controversy about whether this is true.

Knowing all this, I had to see Okeechobee for myself. A family reunion staged on both coasts of Florida gave me the opportunity I needed. As my son and I drove from the Atlantic to the Gulf, he agreed to a detour so that I could see my sinkhole.

I only got to make one stop at Okeechobee, and that briefly. (I hope to go back for a longer visit someday — probably alone.) Still, it did not disappoint.

Here is what I saw.

Okeechobee is surrounded by a waterway lined with houses and boat docks: 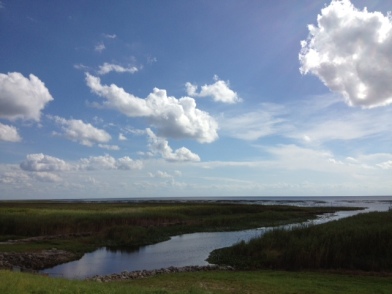 The “moat” around Lake Okeechobee.

The levees are maybe 30 feet high: 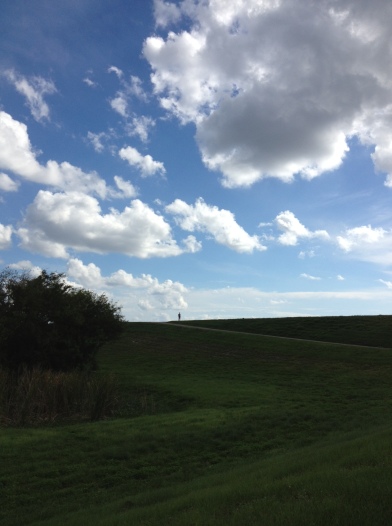 That human speck at the top of the levee is my son.

Boats go through locks to get from the moat to the lake: 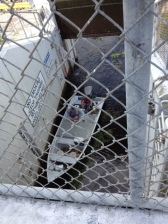 Fishing boat heading for the lake.

A person works in a bunker, opening the locks for boats: 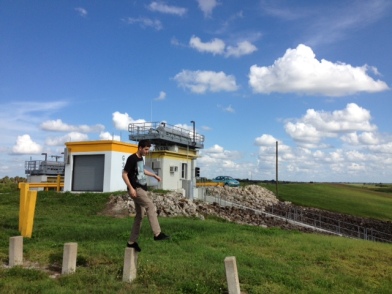 The lake is low on water, from drought and flood control, leaving a marshy area just below the levee: 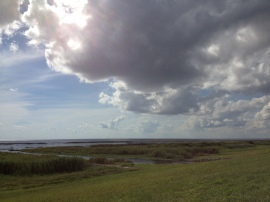 That glint on the horizon is the water of Lake Okeechobee, which is 20 miles across: 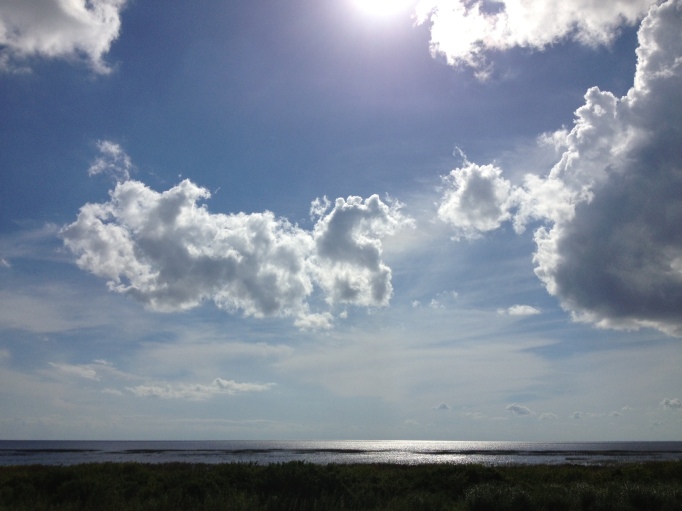 Florida has a lot of sky.

Many of the levees are topped with biking and walking trails. It could be fun to circle the lake!… Maybe… The circuit would take more than one day….

That is indeed a large sinkhole.

(The WP Weekly Photo Challenge asked to see a horizon.)

On my occasional trips to Florida to see family, I have been repeatedly disappointed in efforts to spot alligators out in the open (not planted at a zoo or theme park).

Please understand, I don’t have a death wish. It’s not like I traipse through the Everglades calling here gator gator. I simply search for remnants of gator culture in Florida suburbs, under the assumption that surviving gators will shun humans rather than eat them.

They certainly shun this human!

At the golf course where some of my family lives, signs like this one promise gator action near the pond: 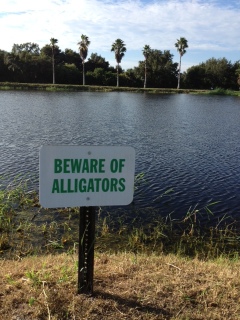 I’ve never seen any gators at the pond, but one late afternoon, looking for gators did bring me to this wonderful reflection of the horizon: 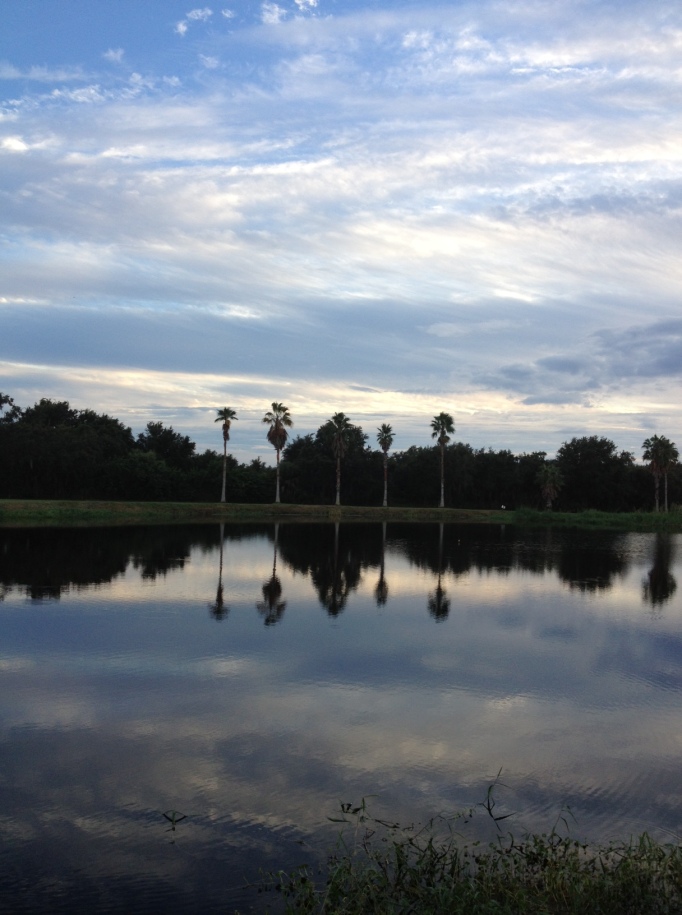 Finally and at last, as we left for the airport to come home, I saw one! A little guy running away from us, toward the horizon: 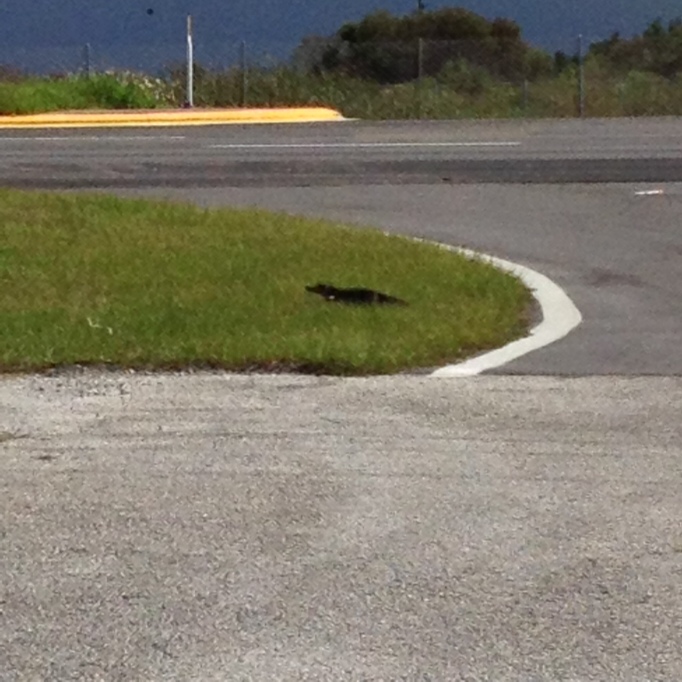 We almost didn’t get the picture – took us many precious seconds to figure out that speeding up to see him before he got away made him run faster to get away.

Everywhere in Florida there are Beware of Alligators warning signs but after several trips to Florida with no ‘gator sightings, I was despondent. So the family took us to a long walkway inserted into the Everglades, and I saw this alligator – dive below the surface. See him? Right where those rings are. 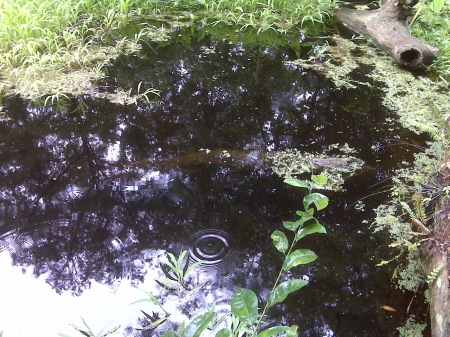 Note to other travelers: we visited the Everglades in late summer. Mosquito season. Not recommended. (With three applications of bug spray, wearing long sleeves and pants, we got away easy with only a few thousand bites. Each.)

(Posted as part of the Weekly Photo Challenge.)